I'm Trying Not to Project My OCD, but...

One of the most stressful parts of moving – aside from having a team of complete strangers touch every single item in your belonging and load it mysteriously into a cavernous flatbed, while you cross your fingers and toes that the truck driver has just the right amount of coffee in his system to make the drive safely, but not too much so as to make him reckless going over the speed limit, lest your great-great-grandmother’s prized tea set be broken – is deciding how to organize the kitchen.

In our first four years of marriage, we lived in six houses, four we owned, and two we rented while we were in the process of moving. We’ve been put for almost eight years now, but I’d like to think that concentrated block of experience is still with me…that, if anyone knows how to organize a new kitchen, it’s me.

There are pretty monumental decisions to be made in organizing a kitchen, you know, ones that – at least in my experience – involve complex geometry and higher-level calculus to figure the optimal location of the silverware in relation to the sink, the dishwasher, and the prep area.

Sure, if you improperly allocated a cabinet to plastic ware, one that you later realize would be better served to house glassware, I guess you could change it. But that would involve so much work, and possibly, the use of a stepstool.

Yes, I think it’s better to make these decisions right the first time, commit to your chosen kitchen layout, and commence cooking.

After the painstaking assembly of the girls’ kitchen over the course of two nights – involving the use of both a power drill and a vacuum [thank goodness our girls are not light sleepers!] – at last it was time for me to organize their kitchen.

At this point, we have only the pots and pans and dishes and food that came with the kitchen, so the task was not too arduous, and I feel like I made really good decisions about what goes where.
I considered the utility of the items, their relation to the various appliances, and the size of the storage vehicles in reference to the number of items to be stored. 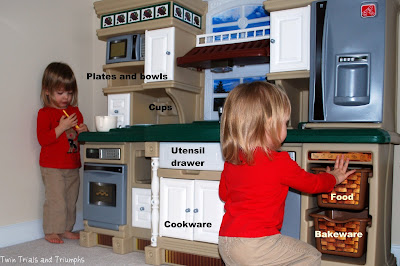 I think this makes perfect sense. I’m just trying to convince the girls to go along with The System.

Every time the girls descend upon their kitchen, they almost immediately pull out all the spoils. It’s only a couple of minutes before things are everywhere! When I’m invited to join them, “Mommy, play kitchen, please!” I often start by saying ,”Let’s put some of these things back where they belong!”

The girls humor my efforts most of the time…but left to their own devices, they might put the dishes under the sink and the cookware in a drawer.

I’m trying to encourage free play. I’m trying not to project my OCD onto them.
But it’s oh.so.hard. sometimes to sit back and see a spatula amongst the fruit. There’s a drawer for that, you know???
at 2:11 PM
Labels: holidays, psychology

Ha! We only have a sandwich-making set and some vegetables right now, but it's all just tossed into the cabinet or the 'refrigerator' at the end of the night.

Come to think of it...my own kitchen is like that sometimes! : )

Funny! While I'm not there yet, I see myself being there soon. I always needed my crayons to be organized by color when I was little. When the girls get to the "coloring with crayons" stage, I'm definitely going to struggle when they put the violet crayon next to the sienna crayon---it's supposed to go next to the cornflower crayon!!

You just put a huge smile on my face....I am just so glad I am not alone. I almost felt like putting all the extra's put up!!!! I know it was a horrible thought for a mother to have...but I can't get over the mess. I have decided to turn my head the other direction and make DH clean up the kitchen supplies! ;-)

Yeah, I know! But, I've had to give up this battle at our house, at least for the time being. T is not helpful in putting things back "where they belong", and the kids seem to be more in line with his thinking (plates can go in the fridge, while ice cream is fine in a drawer), than my way more logical system.

My kids got their kitchen (very, very similar to yours) last Christmas when they were just 3 months shy of 2 year old. Every morning, for months, they would run straight to their play kitchen as soon as they could and dump every item onto the floor- every drawer pulled out, every basket overturned. It drove me nuts. But it seemed that once I stopped caring about the insane mess, they stopped doing in (coincidence, perhaps). Still, I'm doing my best to just let them be. As long as everyone is being safe, who am I to say that this is the way they have to play. (But it took me a while to get to this place. Months, I tell you... Months...) :o)

I love this! Gah, I need to get off my bum and clean my kitchen right now! :)

Is it sad that I totally agree with you? No?! Good! I sit down to clean up as the girls play all the time. I'm sure they will hate me for it one day.

It is sad that I want to send you pictures of my own kitchen for some organizational tips...

I'm so glad the girls love their kitchen!

hahahahahaha! we are so alike!! i have to sort through their toys about once a month because they don't get put back the "right" way into the assigned compartments in the storage ottoman!

LOL!!! Yes, while I am not a cook (as you know), I do like order. I too have organized the kids kitchen on numerous occasions, but soon came to realize it is a futile endeavor. They now have a basket with everything kitchen in it. But you are TOO FUNNY and I laugh to see how long you organize before giving into the chaos of kids. If you manage to train them to organize... PLEASE pass along your secret.

Right now my toys bins consist of things like this: 4 train parts, 2 plastic balls, 1 wooden block, a couple of random kids meal toys, 1 naked Barbie doll, 1 plastic chicken (kitchen food), and a rainbow slinky. It is chaos, pure and simple. I figure as long as everything at least makes it to a bin, I'm golden.

Every so often I will rearrange everything to "its place", because it drives me crazy too. But the kids don't seem to notice either way yet, and I was spending FOREVER trying to keep it organized all the time. Good luck with your OCD...lol. I didn't realize I was OCD until I had kids!

That is some serious OCD!

This is hysterical and it IS hard!!!! I'm so with you!

Every time I play "dollhouse" with Hailey, she insists that the Daddy take a bath in the dog bath...well, that's just not right, so I show her where the human bathtub is and she's so unimpressed!

Wow! I have been in my new home for 2 years and still hate the layout of where I put everything and if I think I know where it is I find it in a different spot thanks to my husband putting in a new spot. I figured it was because with the chaos of twins I was just not thinking as organized as I once did. I always figured in 20 years or so these things just work themselves out and I was like the rest of the world!

Mandy, you are such a Penelope. Go see http://penelopeloveslists.com and tell me if you agree :)

I know the torture; it’s almost like you twitch when things are out of order, isn’t it?

Ha ha ha! We have that kitchen too. And yes, I have found myself "reorganizing" it on on occasional basis. Okay, fine - I do it all the time. But you can't put pots in the food baskets! It's just not right! ;-)