...well, not in this country…but I can see my sweet kiddos trying to figure it all out.

This mama is a huge football fan (of the American sort), Alabama Crimson Tide football, to be more exact.  While it was only over the last year that we actually let the girls watch any football (the TV is rarely on while the girls are awake), they’ve been decked in Crimson and White since they were tiny. 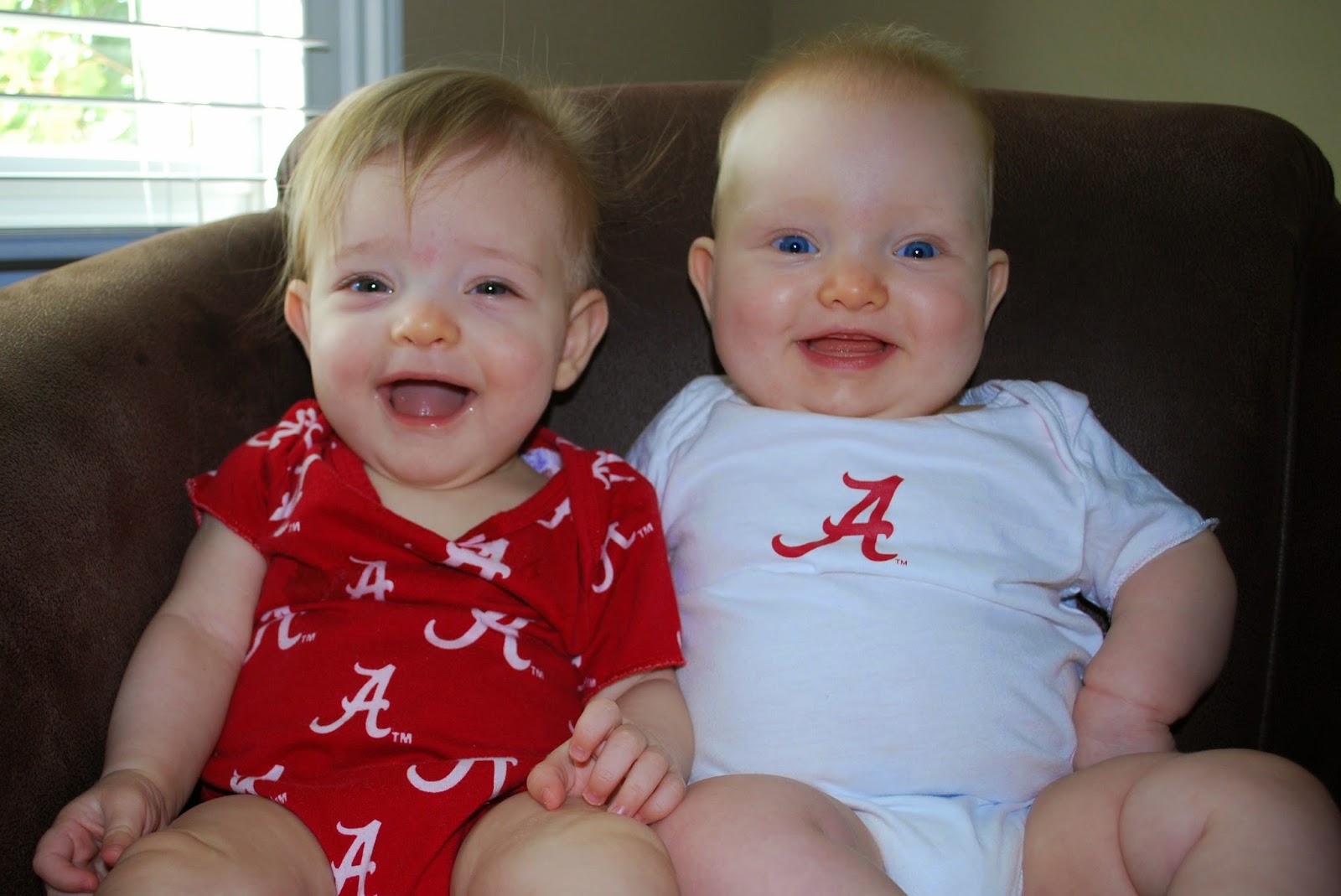 Soccer also runs deep at our house.  I didn’t grow up with the sport, buy my hubby lives and breathes it.  It’s his true passion.

The girls have logged much more English Premier League soccer time in front of the telly than they have football, for sure.  And we play a lot of it, too…in our basement, in the front yard, and every chance we get to go to the park. 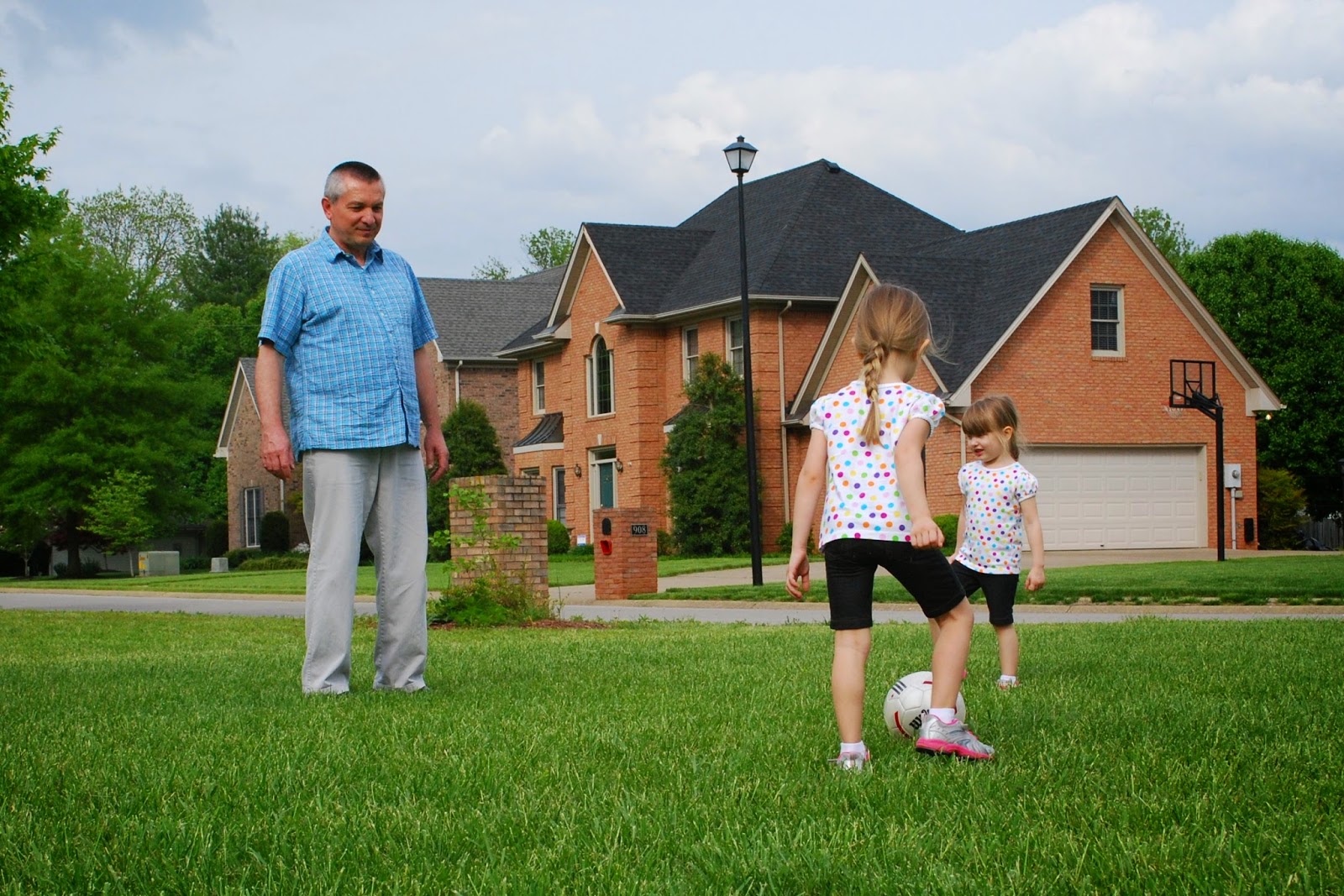 I see the sports as being so completely different, but I recognize now they can cause a little confusion to the wee ones.

We were at the park a few weeks ago, kicking the soccer ball around.  Baby A did something really nice, and I congratulated her, “That was AWESOME!”  She threw her little hands in the air and yelled, “TOUCHDOWN!”

I got my turn at head shaking during the Alabama game this past weekend.  During the first quarter, the opposing team scored first on a field goal.  After a few minutes (still during the first quarter), B said somberly, “Mommy, I don’t think Alabama is going to win.”  WHY would you say that, Sweetie???  “Well, they have three goals, and we don’t have any.”

I had to laugh (perhaps to keep from crying)!

...hmmm...maybe they can play soccer at The University of Alabama...yes, that's it!!!
at 6:06 AM 4 comments: Links to this post
Labels: Alabama, football, outside, park, playing, soccer

The reading bug is a real thing…and my Baby A has got it!

As I’ve written before, the girls have had really solid pre-reading skills for a long, long time now.  I’d count at least two years that I expected them to start reading any day.  I never really pushed them, figuring it would happen when they were ready.  I thought that once they started, they’d just take off, and it sure feels like that’s what my A is doing.

She wants to read EVERYTHING now!

Last night, I was amazed as she made her way pretty proficiently through a huge stack of early reader cards.  She just kept plugging away!

And then before bed, she wanted to read a book.  She picked “The Very Grouchy Ladybug”, which is not exactly an easy reader.  With very little help, she got through the first several pages before it was time for bed.  She BEGGED to read more, but it was time to go upstairs.

It’s a little hard for me to tell exactly where Baby B is on the curve.  She hasn’t proactively sat down to read something with the same gusto as her sister, but she was helping A fill in the blanks in her book last night.  How cute it was to see them playing off each other.

How happy I am to see those synapses firing away.  I hope it’s the start of a long and storied love affair with reading!
at 5:31 AM 3 comments: Links to this post
Labels: milestones, reading

When we first moved the girls into their big kid beds, I was so afraid they'd get up and wander around the house at night.  I impressed upon them that they DID NOT GET UP until their clock turned green in the morning.  "If you need something, call Mommy."

The girls are far old enough to go to the bathroom by themselves...but during the night, on the rare occasion that someone needs the potty, I get a summons.  It rarely happens, so I don't really mind.

Tonight, the girls had been in bed less than 30 minutes when I heard my A call for me.  I ran upstairs and found her sister already snoring.  "Mommy, I need to go potty," A whispered when I approached her.

I walked with her into the bathroom, and she did her thing.  I haven't done this in a long time, but I picked her up when she finished.  Instead of her walking back to her bed, I carried her.

"Thank you, Mommy," she told me as she hugged my neck.

What precious baby girls I have.

Fall Festival, but alas, No Pictures

I was talking to GG on the phone last week, and I told her what a big week the girls were having with their Fall Festival.  “I know you made a bunch of pictures!” she said.

Sadly, I didn’t make even one.

There have been a couple of occasions that I’ve gotten the girls out on the front porch step to take pictures before school, but most days we’re on the straight and narrow, trying to get our morning chores done and stake our place in the drop-off line around 7:30.

Even without the visual mementos, I still want to catalog what a fun time the girls had.  Here ‘goes!

Monday was Pajama Day.  The girls were tickled to wear their new-ish “pig” pajamas to school…and they were some kind of adorable.

Tuesday was Hat Day.  They wore their dinosaur caps that GG bought them this spring.  I also let them wear new shirts we bought last weekend.  (How grateful I was to find adorable little shirts at Kohl’s…one was embroidered with the face of a fox, and one, with the face of a mouse [which the girls want to think is a cat]…they remind me of something I would have bought when the girls were tiny…so sweet!!!)

Wednesday was Team Day.  The girls wore their Bama jerseys.  On this day, I went to eat lunch with them.  I could easily write a post on that in itself, but I’ll shorthand here to say how sweet it was to cuddle with them in the middle of the day.  After we ate lunch, I got to shop at the book fair in the library with them.  They were SO excited to pick out a few books.  They’d been talking, in particular, about one entitled “Creepy Carrots”.  We found that first, and I let them each pick another couple.  They seemed almost incredulous that I allowed them to continue to choose.

Thursday was Wacky-Tacky Day.  The girls and I picked out a short-sleeve striped shirt, paired with a floral sundress and denim leggings.  Striped reindeer Christmas socks topped off their ensemble.  Hee hee!

(Actually, I have one picture, although I didn't take it...it was taken by M&C's mom, who had the girls over for a much-anticipated play date that afternoon.)

Thursday they also had a Teddy Bear Sleepover at school.  The girls each packed a small bear, along with a blanket (a hand towel, in our case), a toothbrush, floss, and a night-night story.  On Friday, they again wore pajamas to match the theme, and they were shocked to see what a mess their bears made at school overnight!

The girls wore their “pig” pajamas again that day…as those are the only ones long enough to properly fit a certain growing kiddo.

Friday morning, I volunteered to sell tickets to the festival during the morning meeting.  It was fun for me to get a visual of the way the girls start their day every day.  I will say, it was LOUD!  They played Katy Perry’s ROAR in the gym (as the school mascot is the tiger).  It was pretty cute to see all the kiddos grooving.

Friday night, I hustled home from work and we headed back to school for the culmination of the Fall Festival.  I knew it was a big deal…but I had no idea how the entire school would be teaming with people!

We headed to the gym first, where the girls climbed the rock wall.  They made it all the way across!  They played Sucker Pull, Toss the Penny, and Mini Golf.  They had a lot of fun doing the Book Walk…Baby A was super lucky and won three books!  Baby B won one.  I was thankful to have been able to steer them clear of the game where you win the goldfish!  They did a couple of outside events, including Cornhole and the Duck Pond.  We ended the night by exhausting our tickets on the inflatable slide.  (Mommy got in on that action, much to Husband’s chagrin.)

At one point, Hubby wanted to take our growing loot to the car.  He said, "I'll find you guys."  I'll bet he won't make that mistake in the future!  I know he had to look and look to find us...not only was it super packed, but the school is designed in a big circle format...AND the girls were both wearing their fall festival t-shirts, along with at least a hundred of their closest friends.  HA!

Such a fun and busy week for my growing girls!!!
at 1:23 PM 3 comments: Links to this post
Labels: fall, school
Newer Posts Older Posts Home
Subscribe to: Posts (Atom)