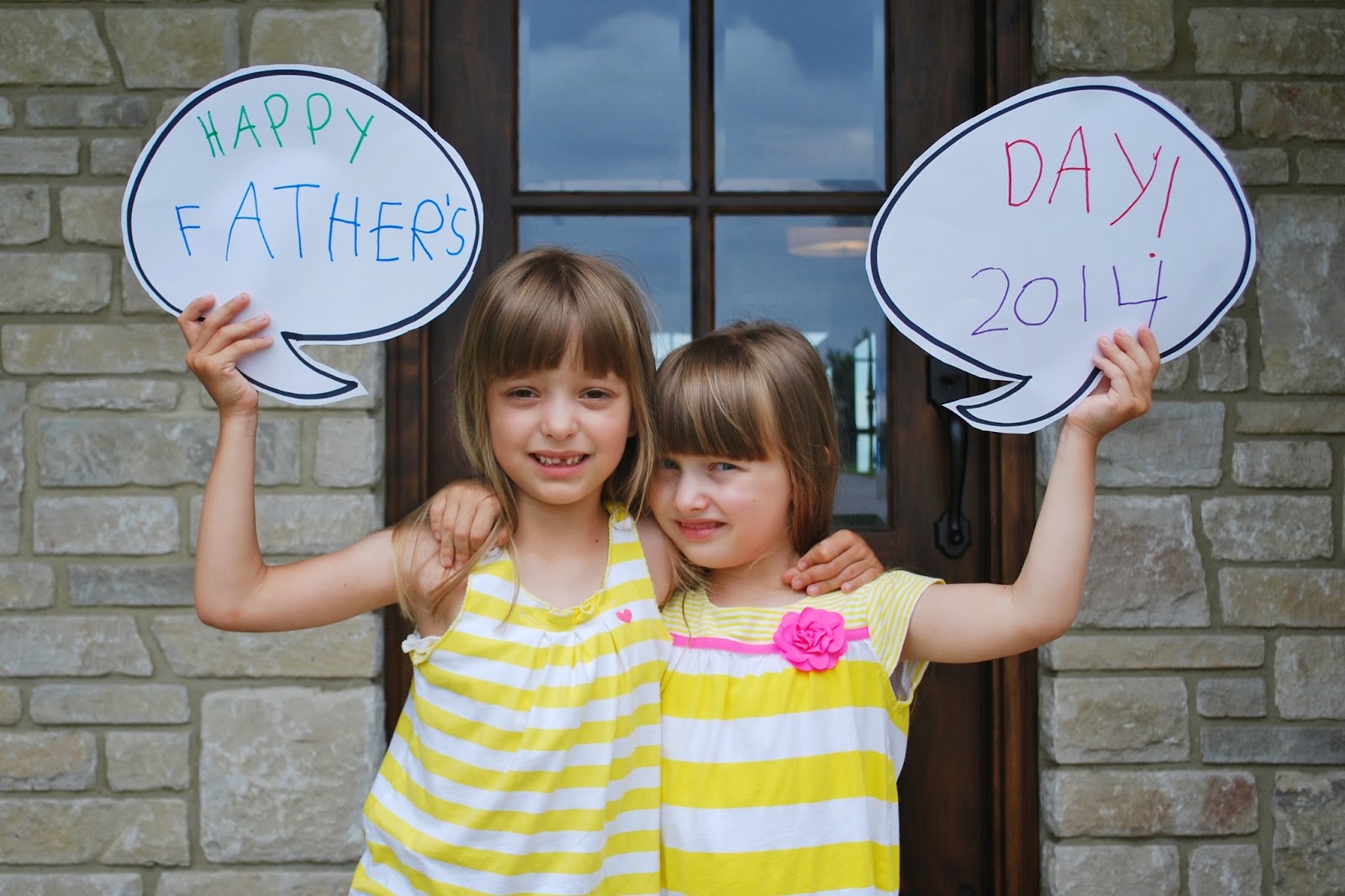 The girls had so much fun making these conversation bubbles this week!  I love this picture...a great addition to our Top 10 list tradition, I believe!

10. You got us a beautiful house with an awesome basement, and we love sharing it with you!

9. You showed us how to milk a goat and took us to New Orleans…fun!!!

8. You are the master of Ne Ljuti Se Covece, Jenga, and Monkey in the Middle, to name a few.

7. You found the best place for sledding this winter and you posted yourself at the bottom of the hill to keep us from sliding into the rocks.

6. You take us to the Olive Garden for special Daddy-Daughter dates.

5. We enjoy sweet snuggle time with you when we watch Too Cute! and Aerial America.

4. You learned how to put our hair in ponytails (kind of).

3. You cut pineapples and melons better than anyone in the world.

2. You give us the best nose kisses and hugs.

Berries and a "Bouquet"

We had plans to pick strawberries with some friends a few weeks ago…but the weather and life happened, and we didn’t make it.  I’d been meaning to call the farm (a place about 35 miles from here, somewhere we’d never been) to see about their berry patch, but, well, life kept happening, and almost too much time went by.

I finally got myself together to make that phone call on Wednesday, and I was told they would only have strawberries for a couple more days.

Thankfully, our schedule didn’t have anything concrete on it, and we quickly dressed and found our way to the farm [in the middle of nowhere!].  We got on our sunscreen, donned our hats, and went to work! 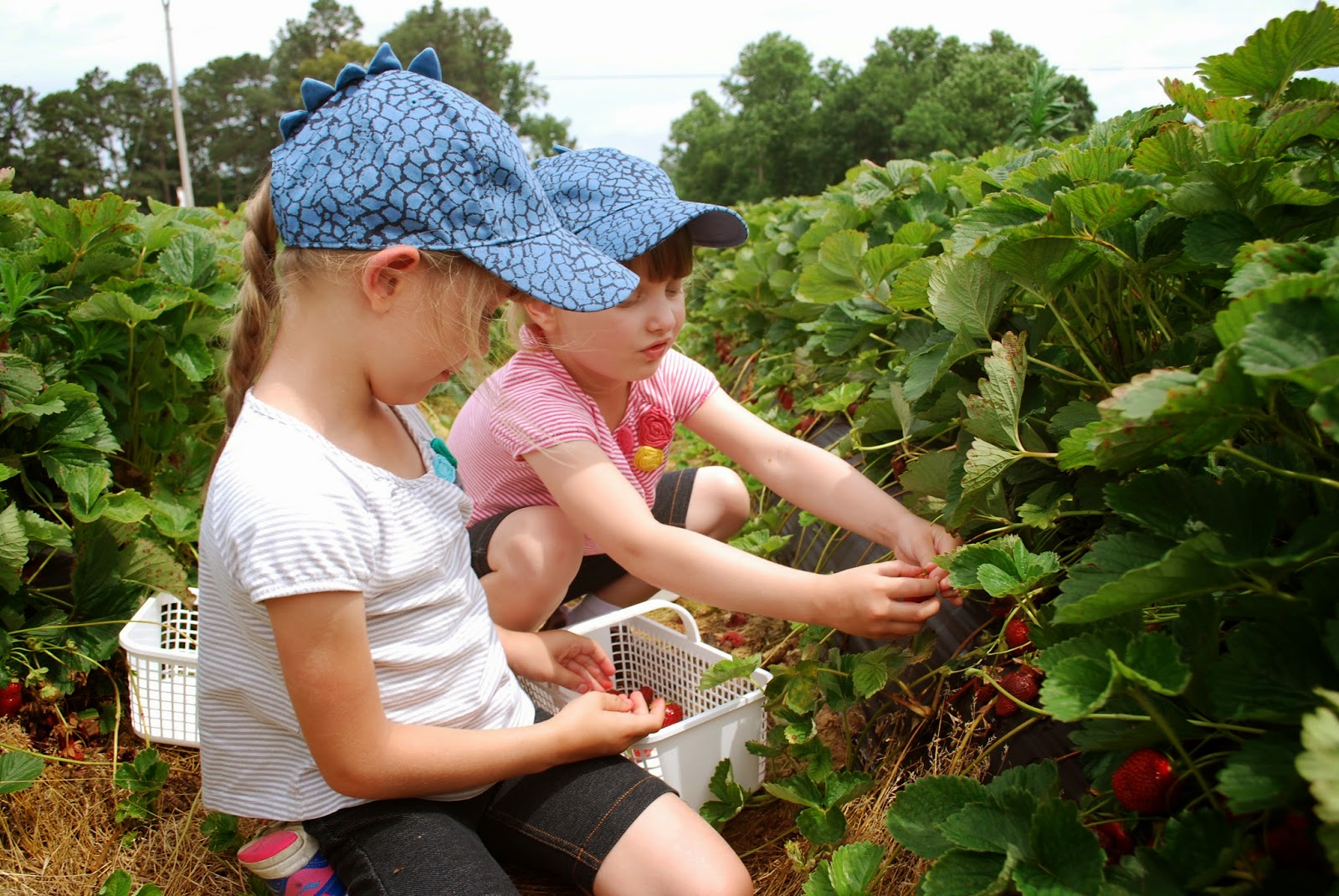 The raised beds were very easy to navigate, and before long, we picked just more than 10 POUNDS of strawberries!

We paid for our berries and left them at the stand while we went to have some lunch at a little restaurant there on the farm.  We decided to walk across the grounds…and I’m so glad we did!  This mommy had so much fun taking pictures!


When we got to the apple orchard, Baby A was mesmerized by all the blooming clover.  She knelt down , being very meticulous to pick just the right ones. 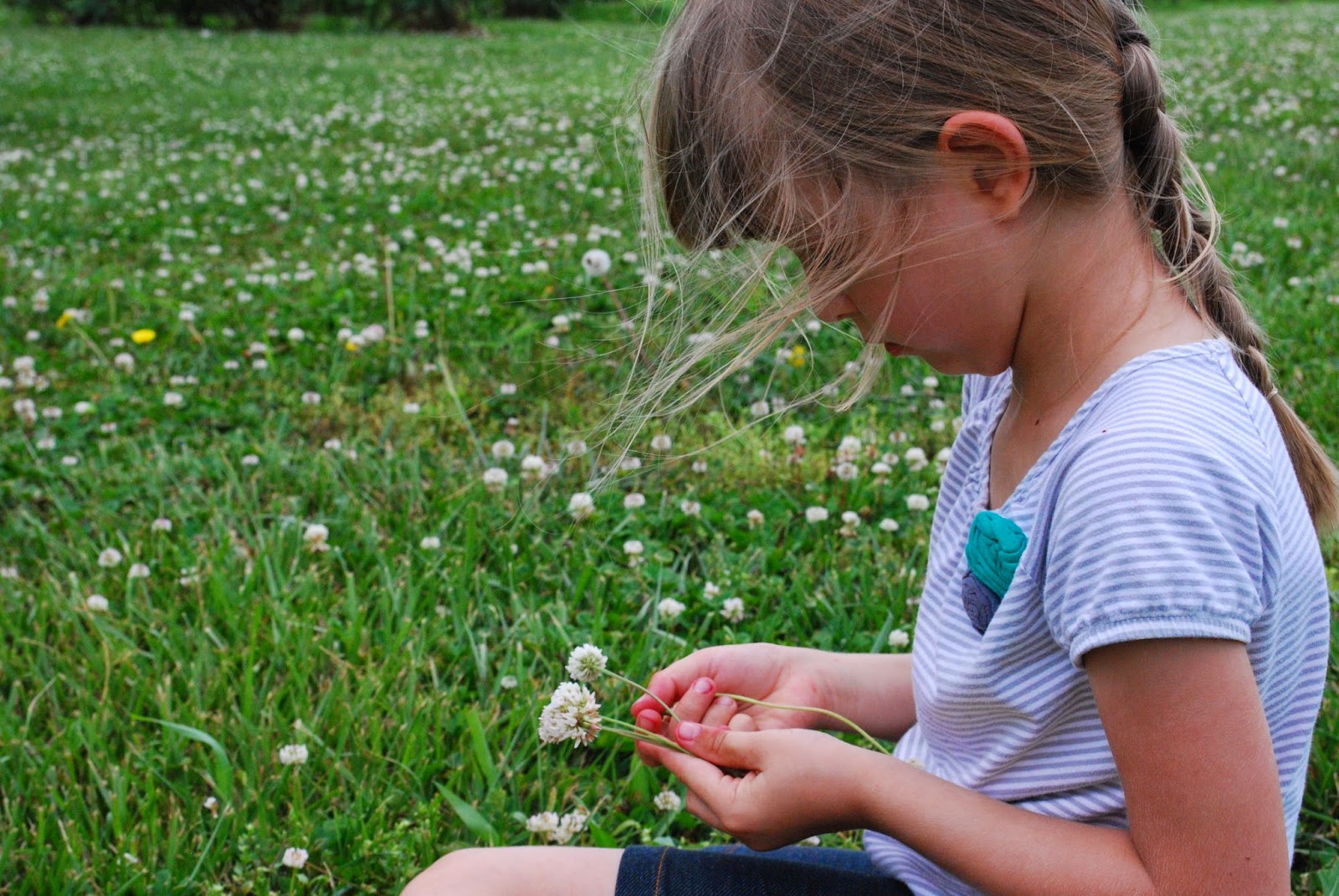 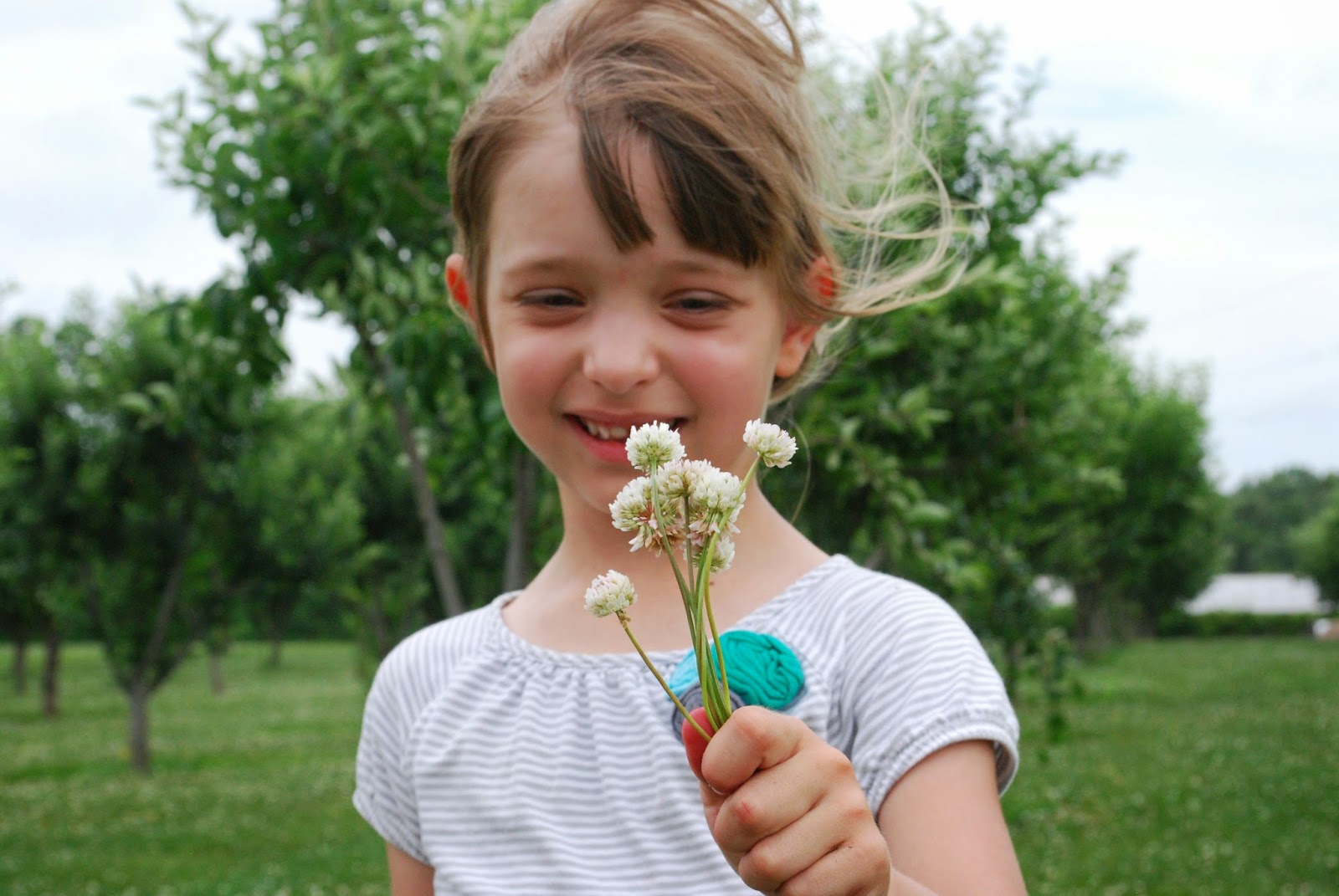 She was adamant about hanging onto her bouquet.  I kept it for her through lunch, and when we went to the restroom, we all traded turns holding it.  I wet a towel and wrapped the stems of the bouquet so we could take it home.

Baby A decided she wanted to give it to her daddy.  I put it in a vase (a tall shot glass from our honeymoon in Cancun…hahaha!), and Daddy was very gracious in receiving his gift. 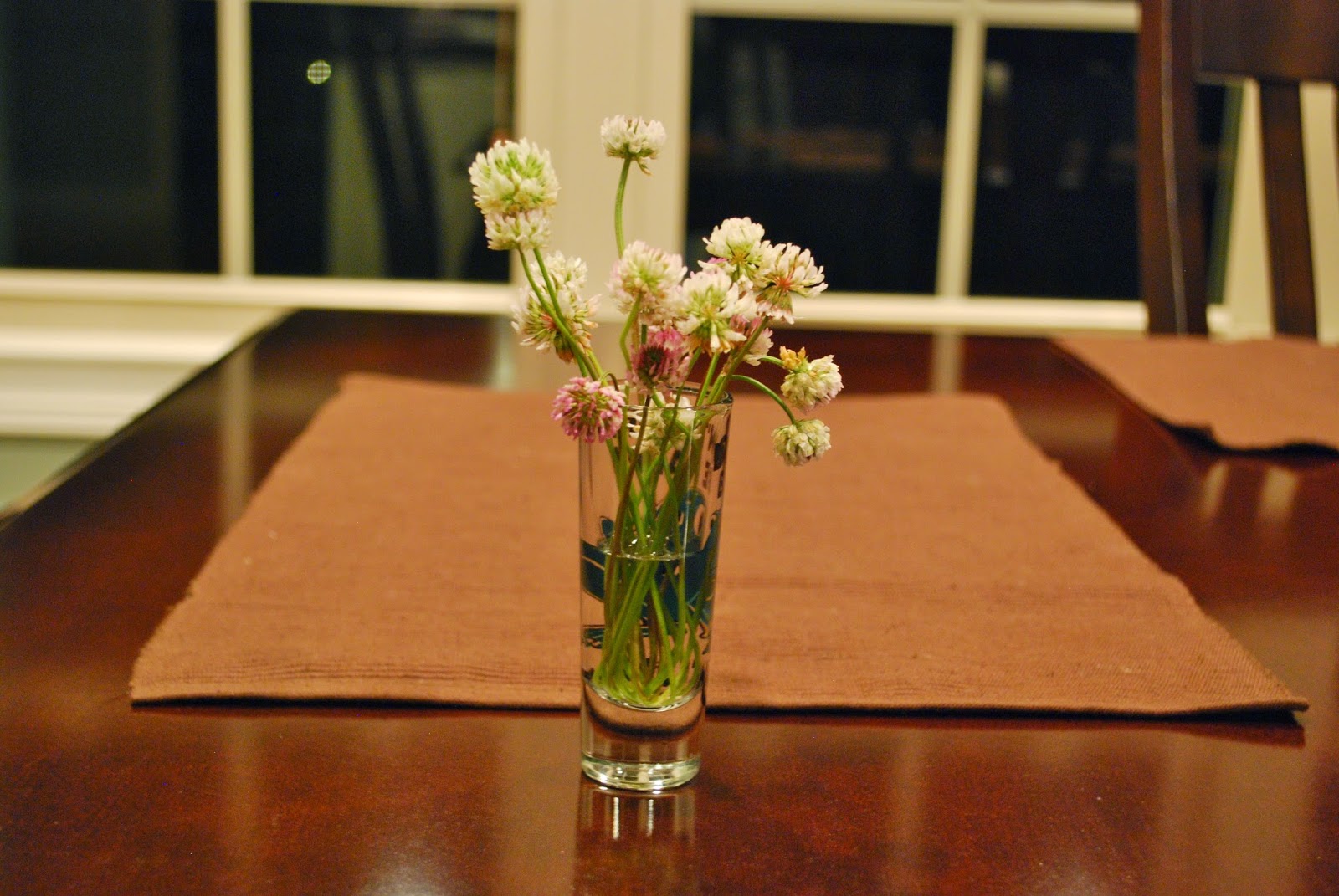 The “flowers” lasted for two full days on the table.

And I got to see Baby A’s eyes light up every time she looked at them.  The strawberries were delicious, but this has to be my favorite part of the trip. 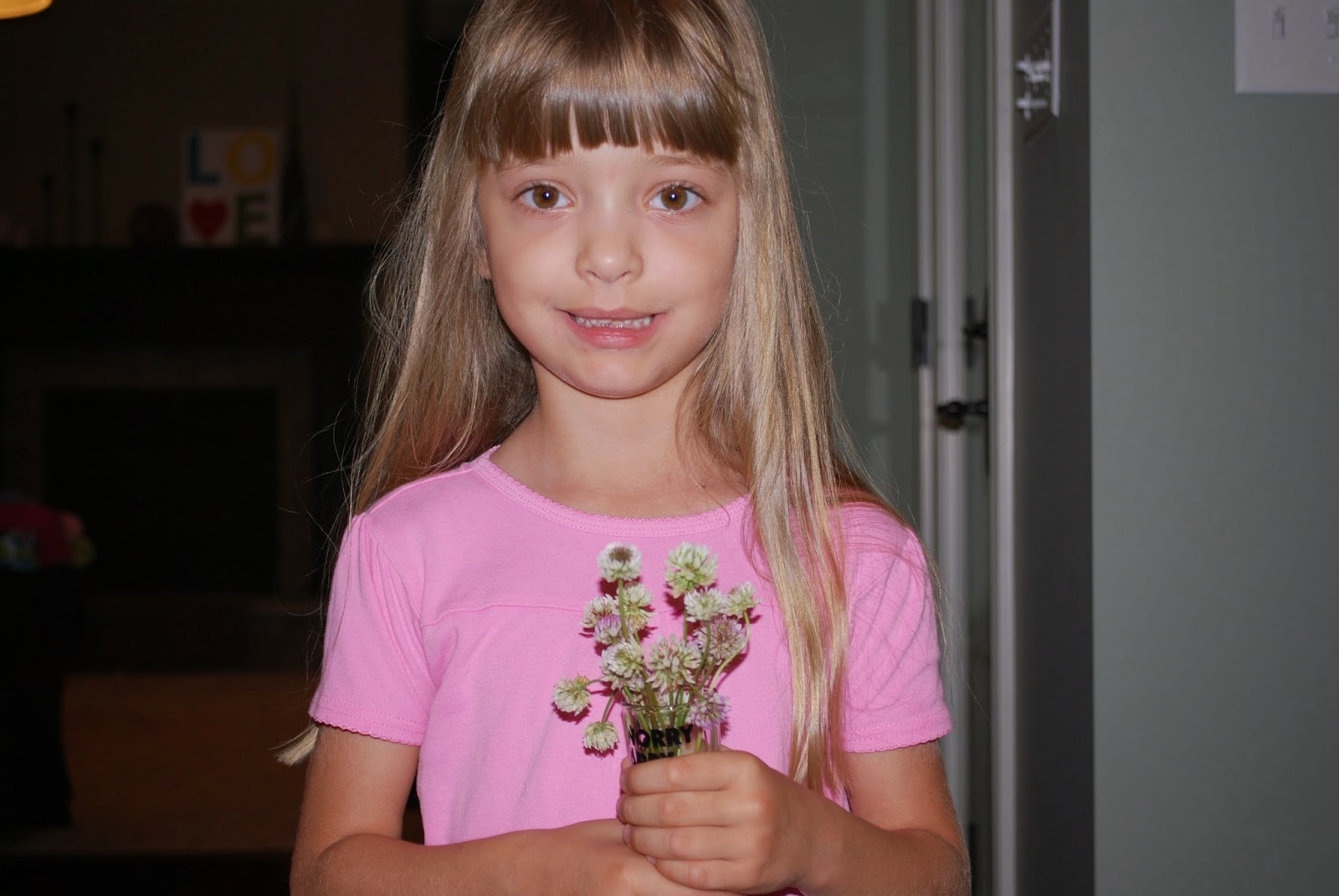 at 9:26 AM 3 comments: Links to this post
Labels: orchard

I had to check back through my pictures to see that the girls got their bikes on May 1.  It’s hard to believe it’s only been a month since they got their wheels!

Thanks to their training wheels, the girls could ride their bikes as soon as they got them.  It only took a couple of minutes before they were making their way around the flat part of the driveway.  That first day, though, they couldn’t quite make it to the top of the driveway.  There’s a slight slope, and it was just enough to stump them.

The next day, the girls mastered the driveway.  They were so proud!  And I was so amazed at how quickly they built up their strength and stamina to cross that hurdle.

The next hurdle was making it off the driveway (there’s a very slight [1/2”?] drop from the drive to the pavement).  They did that on Day 2, and they were able – with constant supervision – to make it around the dead-end circle in front of our house.

The next hurdle was making it to the top of the hill in front of our house, about three houses up.  It took another couple of days – and lots of pushes from Mommy – but they mastered it pretty quickly.

Those obstacles gave the girls a lot to practice, and they spent quite a bit of time zipping up and down the drive.  (Going off the driveway still requires permission – and accompaniment – from Mommy.)

The next hurdle was going down the hill, to the stop sign at the bottom of our road.  I had to make sure the girls had good command of their brakes!  Once I built up my courage (!!!), they had no trouble making that route.  Coming up the hill was another story, though.

It took a few tries, but Baby A finally mastered the hill coming home last week.  For the first time today, B made it [without Mommy’s assistance], too!

Today, June 3, we made our first voyage outside the safety of our dead-end street.  The girls rode (and I ran!) all the way to the pond in the middle of our neighborhood.  It’s a solid ¾ of a mile there, and there are several hills, too.

We took a few water breaks, but I was incredibly impressed with the girls!  They made it the entire way, on their own pedal power!  They followed my instructions, and they took turns leading the way.

I told the girls that I would get a bike when they learned to ride more proficiently.  At this rate, it looks like it won’t be long before I’ll have my own two wheels!
at 1:42 PM 6 comments: Links to this post
Labels: bikes, exercise, milestones, outside
Newer Posts Older Posts Home
Subscribe to: Posts (Atom)