We had such a fun Easter day yesterday.  It was relaxing and fun, just hanging out and enjoying each other...and eating too much.

In their Easter baskets, the girls got a couple of new books, a pencil pouch (emblazoned with "QUACK" and "CHEEP" in honor of their "spirit animals"...HA!), and they each got a DVD. 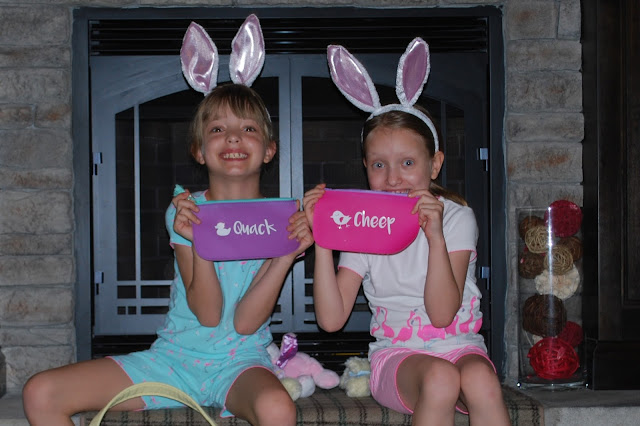 We've never watched much TV in our house, so the idea of getting a DVD was a bit of a new concept.  One DVD was "Charlie and the Chocolate Factory" -- the Gene Wilder version.  The other was the first season of "Little House on the Prairie".

We've been reading the Little House on the Prairie books for the past couple of years.  To my knowledge, the girls had no idea it was a TV series, too.  They were super excited to see the characters come to life on the big screen yesterday afternoon!

B remarked that Laura had her "big girl teeth", and she mused what the real names of the animals were in the show.  "Maybe they actually named the dog 'Jack' so he wouldn't get confused."  HA!

My A was the funniest, though.  There were a few tense scenes, including the one where they cross the river in the wagon and they fear Jack has drowned; and the one where the fire threatens the homestead.

Such a fun Easter day, punctuated by carrot cake.  It was a big hit all around, and my carrot-obsessed Baby A was in heaven!