{This post was written LAST weekend.  Proof that I can write...and then get lazy about pressing the PUBLISH button.  I'm trying, Y'all!}

Towards the end of the day yesterday, we began to recount all we'd done and accomplished.

- Daddy went to the hardware store and got a $7 gadget to fix the garbage disposal.  SCORE!

- We left the house at 11 to drop off one car at the dealership.

- We went to the university and dropped off the girls for their first Super Saturdays class.  They were a bit nervous, but super excited!

- After their classes, we went downtown to enjoy a snack...hot chocolate and a cookie were well-deserved!

- We picked up the car at the dealership and all headed home.

- 30 minutes of Quiet Time was well-deserved by this mama!

- We got dressed in workout gear and the girls and I headed to the climbing gym.  We were super disappointed when we arrived to see it was jam-packed.

- We buckled back in and decided to knock out our grocery shopping...sans list!  Living on the edge, I tell ya!

- We picked up boiled shrimp at the grocery and came home to that for dinner.  Easy-peasy.

- We hung out with the cats in the den uncharacteristically late...it was 8PM when the girls went to bed!

WHEW!  No wonder the weekends evaporate!
at 5:08 AM No comments:
Labels: a day in the life, weekends

Since our climbing debut on the girls' birthday weekend, we've been back to climb every weekend (save the one when we were snowed in!).  The girls love it, and so does their mama! 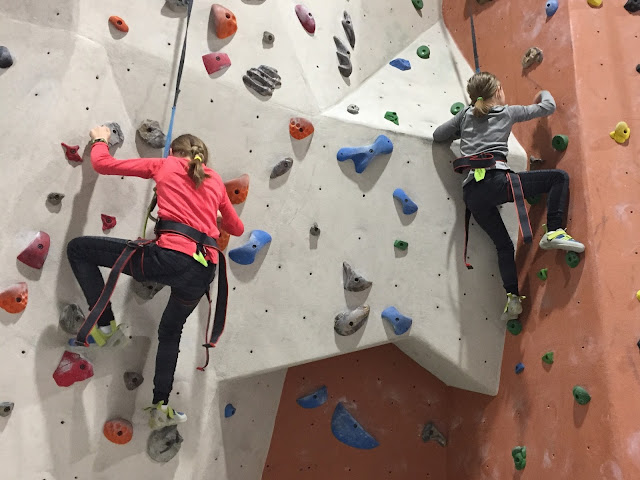 There are numerous walls, with varying degrees of difficulty.  One of the most challenging has this shelf with lots of angles.  Last weekend, Baby A set her sights on conquering it.

She was intent on getting to the top of this one. 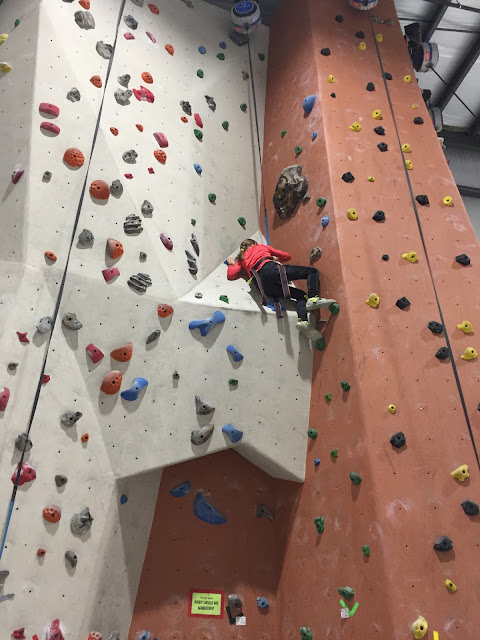 She tried different tactics.  This angle.  Then another one.

If I had to guess, I'd say she probably tried at least 15 times...and she just kept trying...trying to figure out how to go up from one direction and then pivot to head in another. 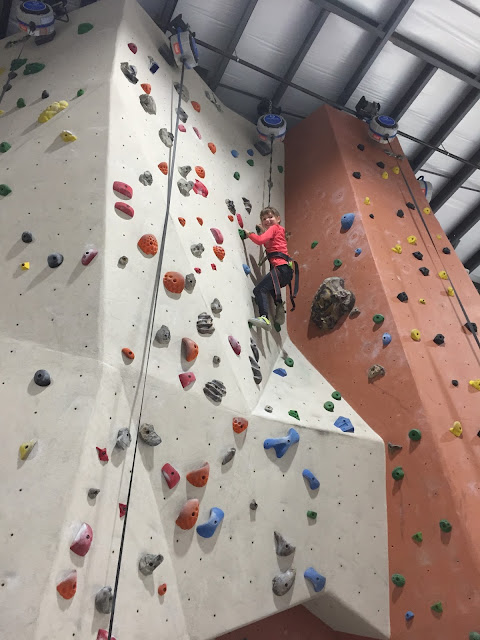 I was so proud of my persistent little spider monkey.  And she surely was proud of herself.

This is a post the girls will probably frown upon when they're a bit older...but it's one I really want to write in hopes of remembering this one day.

(I can't begin to understand this.  I know they don't like the interruption from their books...or from hanging out with the cats...whatever...but showers are one of the very favorite parts of this mama's day!!!)

A couple of weeks ago, I told the girls it was time for a shower, and they headed that way somewhat reluctantly.  While I gathered towels and PJs, they got a head start.  Before I knew it, they were giggling and having a big time.

I overhead a cry of "Back wash!"  I was at first somewhat concerned, until I saw what they were doing.

When I joined them, they informed me they had agreed to wash each others' backs.

(One day, when they're older, they'll understand the *other* meaning of 'back wash' and know why this was so funny!)

B apparently had done her job already.  "Are you guys ready to get out?" I asked.

NO!!! They decried in unison.  "Sissy still has to wash my back!" B exclaimed.

Of course that devolved everyone into a fit of giggles.

Fun times!  And if 'back wash' helps give the girls a little more pep towards the shower...I'm all for a good scrubbing!

My BEST WEEK EVER post omitted a rather huge piece of goodness...but I decided to save this for a post unto itself.

The program has quite a history, but prior to 2009, our last championship was in 1992, when I was in 10th grade!  The girls don't have any sense for such a drought, though, as Bama has won FIVE championships in their short lifetime!

You may know it wasn't difficult to find pictures of the girls in their crimson best from each championship year.  What a fun look back at our pride and joy!


And this last year...in comparison to the BABIES in those pictures...it gets me, y'all...

(I'll go ahead and admit that the girls wouldn't necessarily have included Bama's win in their Best Week Ever list.  When B got up on Tuesday morning after the big game, I told her I had great news.  "It SNOWED??!!!" she asked.  Oh, well...they can sing the fight song and they excitedly wear that glorious crimson with the best of them.  I guess I'll take it.)

I'm being slightly generous with defining the past week...it's actually closing in on about 10 days now...but I'm going to give myself a pass on that little transgression.


What a glorious last few days!!!

It started with the girls' 9th BIRTHDAY last Friday.  WOW!!!  We had all our traditional birthday fun...

...French toast with homemade strawberry syrup.
...lunch with the girls at school.
...goodies (ice cream cups this year) with their classmates.
...Mommy picking them up after school.
...shrimp scampi and MOLTEN LAVA PUDDING CAKE.
...and fun presents, oh, my!


Saturday, I surprised the girls with "tickets" I mocked up to the indoor climbing gym.  We had an absolute blast!!!


Sunday, we had a productive day at home, and then a productive few days at school/work.  Of particular note, the girls both made 100% on their timed math tests, even after the holiday break.  Baby A is only one test away from earning the title of MULTIPLICATION GRAND MASTER.  She is excited!!!  B is doing great, too, tracking a couple of weeks behind her.  Those titles will be cause for major celebration!

On Friday, we all got a huge surprise.  School was preemptively cancelled late Thursday due to impending snow.  The shock was that Mommy's work closed early Friday morning, too!  What a glorious family day we had together.  We mostly snuggled by the fireplace, and the girls built an obligatory snow-day blanket fort.  AND Mommy and Daddy got most of the holiday stuff packed away (FINALLY).

Saturday morning, the girls were up EARLY in anticipation of snow play.  And PLAY in the SNOW we did!!!  We had great snow for sledding, and it's wasn't unbearably cold, either.

at 7:54 AM No comments:
Labels: birthday, school, snow, traditions

At 8 1/2, the girls' milestones are not what they used to be.  They've learned to roll over...to walk and talk...to ride a bike.  Surely one day they'll learn to swim proficiently too (!!!), but it seems less frequent as BIG KIDS that there's a write-it-down milestone.

What happened earlier this week, though, I'm counting in that camp.

Monday night, I came home and made Hubby's belated birthday dinner, and I had just a few minutes to chill out with the girls before their bedtime.  I was tired, but when A asked to play Connect 4, I thought that sounded like a great activity.

OK...best out of three, I offered her.

I've never followed a let-the-kiddos-win philosophy.  Nope, we play fair and square.  And my A beat me twice in a row!  With actual strategy!  Slightly bruised though my ego may have been, I was one proud mama!

I challenged A to a rematch on Tuesday night.  I won our best out of five series, 3-1.  I had to work for it, though!  I was watching her consider different moves.  And from my vantage point through the blue plastic grid, it was amazing to see her little mind work.

B wanted in on the action, and I suggested she play the winner of our series.  I am still chuckling that she said, "I don't wanna play the winner!"  HA!  And -- knowing she likely wanted to play me -- does that mean she had her money on her sister to win???  Ack!!!

B pondered and postured, just as her sister had.  I managed to win the best of three series 2-0, though.

Stepping back, this little exchange over the past couple of nights has been invigorating.  Wowza!  Bring it on, milestones!
at 5:23 AM No comments:
Labels: games, growing up, intelligence

Baby A came home a few weeks ago with a paper to let us know that her art teacher had selected a piece of her artwork to display at a pop-up gallery at a local ad agency.  The teacher could only select four pieces from the entire school...and our A was among them!  What a great honor!

Baby A was super excited, counting down the days until the "gallery opening" and reception.  (Baby B was tolerant of A's excitement...but she didn't quite share the same level of glee.)

The big day finally arrived.  I left work a few minutes early, and we made our way downtown to the agency.  There were quite a few people there (as each school in our district -- elementary, middle, and high school -- was represented).  A's art teacher was standing close to the door and intercepted us before we walked in.   She told A, there's a BIG surprise for you.

And a BIG surprise, it was!  We were floored to see that A's artwork had been enlarged to cover the wall inside the entrance!!! 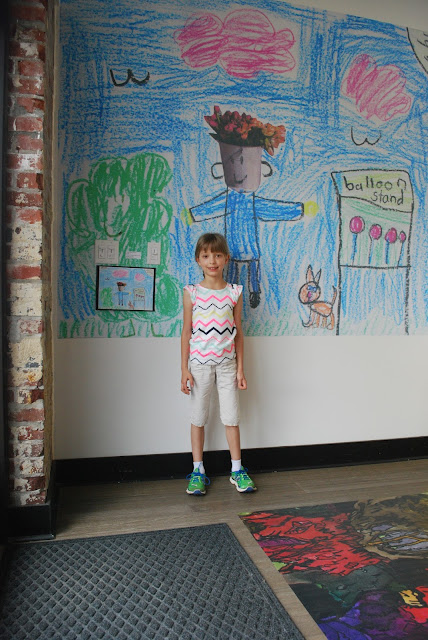 I'm not sure that A knew what to think.  She was very focused on *how* they enlarged her art.  What was it made of?  How did it stick to the wall?  Would it come down?

She eventually warmed up to the idea and posed for pictures.

We enjoyed seeing all the art on display, and we spent plenty of time admiring the Baby A Wall.

When we left, we planned to eat somewhere downtown to celebrate our fun family evening.  Baby B had one suggestion, and A had another.  Then Baby B, of her own accord, popped out with, "Sissy, it's your special day.  You choose."

That was a brilliant display of another kind. 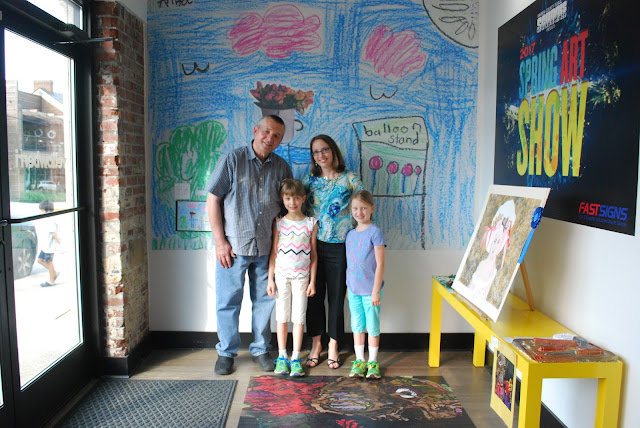