The Sweetest Thing This Christmas

This was such a sweet Christmas.  It warms my heart how the girls have been excited over the dearest things.

…their Candy Cane Hunt.  They’ve been asking about it since Day 1 of their Advent calendar.  They were SO excited to finally get the nod on Christmas Eve.  And they were so good about taking turns reading the clues.

…Mommy’s Christmas breakfast.  I didn’t realize this made such an impression on the girls, but my A has been talking about Christmas breakfast for days.  The girls think it’s a huge treat to eat Mommy’s fruit tart – in the shape of a Christmas tree – and from holiday plates, too!  On Christmas morning, I was buzzing around early and I heard the girls upstairs over the monitor.  B: "I hear Mommy making Christmas breakfast!"  A: "I know! That's my favorite thing!"

…giving presents to Mommy and Daddy.  The girls have been working for weeks on presents for us.  They’ve asked for gift bags, which we discovered this morning were filled with special drawings and messages from them to us.  They wanted us to open our gifts the very first thing, long before they opened anything themselves.

My heart is very full at these girls’ hearts…such sweet blessings we have at Christmas, and every day.
at 6:30 AM 2 comments:
Labels: Christmas, sentimental

The Ultimate in One-on-One Time!

Last year, the girls’ classes went on a field trip to the skating rink just before school was out for the holiday break.  It was their first time on skates, and there were lots and lots and lots of slips and falls.  Baby A fared fine, but we had a huge scare that B fractured her arm.  Fortunately, everything turned out OK, but that is a day that will live in infamy in our memories for a long time.

At some point this fall, the school announced they would again be taking a trip to the skating rink.  Baby A was excited, but B quickly declared she didn’t want to go.  So…I spent the month of December in conversation with their teachers about how to handle that.

As it turned out, it couldn’t have worked out any better!

Baby A’s class went skating in the morning.  I was able to join her at the skating rink.  I got her skates on, and we made numerous laps, both on the carpet and on the rink.  There were still lots of slips and falls, but she had a huge smile on her face the entire time.  Mid-way through our time there, I decided to don skates myself.  (I had wanted to last year, but there was no way I could manage TWO non-skaters with wheels on my own feet.)

It actually seemed easier to show A some mechanics with my own skates…and I had so much FUN!  At one point I was trying to illustrate something to A.  I skated a few feet and pivoted around.  A little boy – maybe a year older? – witnessed my “move”.  “WHOA!  You’re like Super Mom!” he gasped.  HA!  And I even enjoyed a round of speed skating while Baby A took a break.

Last night, my A couldn’t stop talking about “THE MOST FUN EVER!!!”  She had such a great time, and I am so very thankful I got to share it with her.

When I left the skating rink, I went to pick B up from school.  It would technically count as a tardy for her to miss a little bit of the school day, but I decided that wasn’t a big deal since she’s missed a day and a half already.  She was SO excited to have 2 ½ hours with Mommy…AND to get to decide exactly what she wanted to do!

She chose to go to Cambridge Market for lunch.  She had her favorites – a chicken salad sandwich and white bean chowder.  She originally ordered fruit, but they were out.  She chose Brussels sprouts as the substitute.  (Hee hee!)

After lunch, we went to the jewelry store to pick out a new bead for her bracelet (since she just lost her second front tooth last Friday).  And then we made a quick trip by the pottery shop to pick up the ornaments we painted last week.

We still had plenty of time to go to the book store to pick out a couple of outstanding Christmas presents.  And of course B got to enjoy some hot chocolate in the café.

It was so much fun for me to do exactly what B wanted to do.

(This post is not nearly as ominous as the title might lead one to believe...but I'm still chuckling over this "stark" exchange!)

Since the girls were small, they’ve desperately wanted to help decorate the Christmas tree.  Each year, I’ve devised some age-appropriate (and finite) task for them to do.  Certainly their involvement has progressed over time, but it’s always been very orchestrated.

This year, the girls just shy of seven, I was ready to turn over more reigns to them.  Hubby pulled the high boxes out of the storage closet in the basement.  I pulled out the lower boxes and began to unpack specific things from them.  I told the girls they could make trips upstairs, carrying small loads.  Baby B helped kick things off, and Baby A was in for the long haul.

Once everything was upstairs, Hubby and I assembled the tree and put the lights on.  The girls watched with rapt enthusiasm…although B was not sold that the lights would be “pretty” until we finally plugged them in.

After a quick vacuuming session, it was time for the girls to start the real fun!

While I unwrapped one box of ornaments, I told them they could take others from their boxes.  I directed them to make a pile of empty boxes and a pile of ornaments.  They were so cute, looking at each one…talking about which ornament belonged to whom, and when they’d made some of their crafty ones. 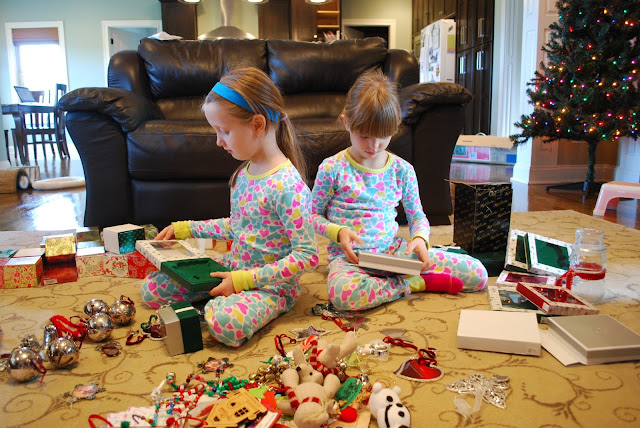 When everything was out, it was time to decorate the tree.  “Have at it!” I told the girls.  I encouraged them to hang a variety of types…our collectible silver bells interspersed with our handmade creations.  We had a small stepstool to help us reach heights, and Baby A, in particular, was great about asking for help here and there to reach just the right branch.

It didn’t take long for the girls’ enthusiasm to wane, though.

I couldn’t help but chuckle to myself.  It IS hard work!

My precious little ones…this is an early glimpse for you that grown-up things are not always full of “fun”.  Enjoy being a kiddo while it lasts!!!  Hee hee!
at 5:38 AM No comments:
Labels: Christmas, growing up, traditions
Newer Posts Older Posts Home
Subscribe to: Posts (Atom)