The girls were born in January, and we had several snows that winter. One of my friends couldn’t believe we didn’t get a picture of the girls’ first snowfall. “Just bundle them up and run them outside for a second to snap a picture,” she suggested.

At that point in the girls’ lives, they rarely left the confines of our bedroom…much less made it downstairs…MUCH LESS to the front porch! NO WAY was I exposing their little lungs to cold air!!!

Last winter, when the girls were a year old, we again had several snowfalls. By then I wanted to bundle the girls and at least take them for a little walk (us holding them, as they didn’t have their first pair of shoes until the following spring!), but Hubby wasn’t having anything of it. He was still extremely cautious of their lungs…and getting them cold…and what if we stumbled…and the snow was bright and might hurt their eyes…and...and...and...

One day, as there was still snow on the ground but the temperatures were in the 40’s, I finally insisted we at least get the girls’ pictures made outside to a backdrop of white. Hubby wasn’t thrilled with the prospect, but he finally relented.

We ran the girls outside, one at a time, for a quick photo op. When I bent down to let one of them touch the snow, I thought Hubby was going to drop the camera and charge, to swoop in and rescue her before she surely got frostbite. The crisis was narrowly averted, though, and I finally got the girls’ first snow pictures. 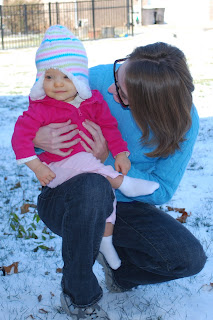 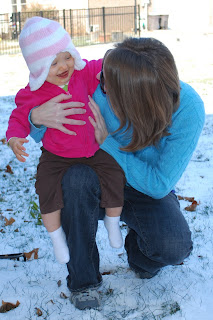 We’ve had – relative to this part of the world – a lot of snowfall to date this year. We finally agreed to let the girls out to play it in…albeit in a very guarded way…this week.

Daddy cleared the drive on Thursday morning. We were able to let the girls stand on the concrete – mostly keeping their feet out of the snow – and play in the snow on the grass.

Being the southerner I am, I grabbed the girls’ sand buckets and shovels to play…it actually worked like a charm! They had a BLAST shoveling snow!!! And their little hands stayed dry, too! 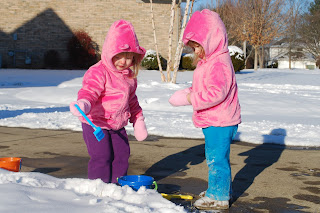 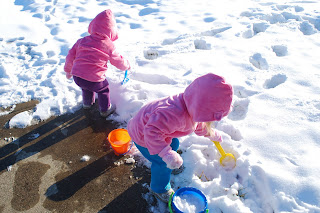 In fairness, whereas the girls didn’t have shoes this time last year, they are now the proud owners of some woolly suede boots…but they don’t have waterproof mittens, nor do they have snowsuits.

I’m planning to make the investment in actual snowsuits and gloves next year so that we can continue to make progress towards playing in the snow. I figure at this rate, we’ll SO be building a snowman by the time the girls are five!!!

Love it! The girls look like they had a ball! Maybe you can get some snow suits on clearance this year for next year! If you are like me you hate to spend too much because they may wear them once or twice?!?! Plus they only fit for one winter season. I hope you had a good evening last night and hope you have a great weekend! I just dressed Molly and Luke in red! Puts me in the Valentine mood!

Oh yes, I am on board with Andrea! I plan on getting snow suits and a sled on clearance for next year. I remember wearing the same snow suit for years, so apparently size doesn't matter!!

what's so scary about snow? heck - we play in it for hours (ok...so we DO have boots and snow pants here but...). Tell DH that cold air won't hurt them and let them have some fun! :-)

Good idea to get snow stuff on clearance - or check out Mom 2 Mom sales (do you have those around you?) next fall. I always try to get our snow stuff resale - they are expensive and even though we use them enough...its still a lot to pay X3!

We were out sledding and having snow ball fights for an hour or so again this afternoon. :-)

Such cute snow pictures! We really need to get our kids up to the mountains to experience snow. I'm one of those spoiled mommas that thinks winter weather means anything below 60 degrees F. :)

I would have whipped those babies outside the first year already :) except if it had happened in the first four months because that was just a blur.

Andrea's got some good ideas - I hate wasting money too... :)

We used summer toys this year too...they were perfect! It's so nice to hear of mothers of twins who were as protective of their kids in the early days as we were. People thought we were nuts...apparently not!

Great photos! This is probably the first year the girls were really going to enjoy the experience anyway, so I don't think it's so terrible that this was their first time out playing in the snow.

Given our location, we figured we'd better get Tiny and Buba used to the cold and snow as quickly as possible. Our 2008 Christmas card has a photo of the two of them all dressed up in baby bunting suits sitting in the late November snow. They were just under 9 months old at the time. Last year they enjoyed going out in the snow, but this year is the first year they're really able to enjoy it for long periods of time. After the last storm they played out in the snow for over an hour and a half, which was great for tiring them out for their nap. :o)

How funny that their intro to snow has been very gradual...I would've been the same way! Cole and Bella were born in Oct, right at the beginning of flu and RSV season. The only time we left the house after they were out of the NICU was to go to the pediatrician's office!!!

Love the pics...they are so sweet!

we're in minnesota, so lots of cold and lots of snow for many months each year -- but ella and zoe's first winter my husband was the same as your husband : ) and i repeat, we're in minnesota! : ) daddy's and their girls ......

so fun, my two love playing with their sand gear all winter long.