Until they were 15 months old, our girls never wore shoes.

I’m from the deep south, and it’s not that I was trying to play into some kind of stereotype. No, I figured that they didn’t need shoes until they were walking…and then, when they started walking (in December / January), they weren’t walking outside since it was still cold.

I felt like my logic was perfectly sound. But I did get the occasional raised eyebrow and question, “Umm, why don’t your girls ever have on shoes in any of their pictures?” from some (well-meaning?) and family members.

I finally bit the bullet in April, when the girls were just over 15 months old. The girls became the proud owners of their first pair of tennis shoes. 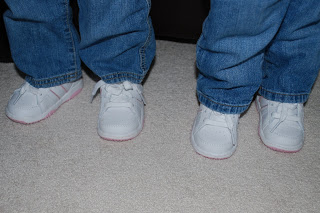 I decided the experience wasn’t so terrifying, and I went on to buy the girls a pair of sandals, and later, a pair of water shoes. 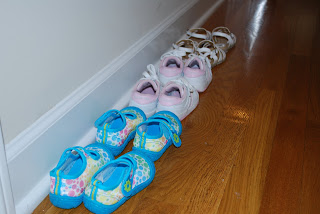 I found there was something rather gratifying about them being able to walk outside.

This fall, about six months into their entry into the World of Shoes, I figured it was probably time for a new pair of tennis shoes. We purchased a pair very similar to their first, in a larger size.

Feeling comfortable once again, I bought the girls the.cutest.pair. of moccasins for them to wear on walks (in their stroller). 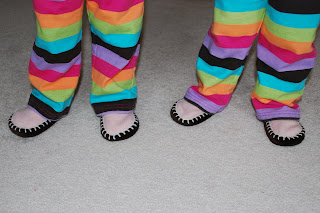 And then I fell in love with the.cutest.pair. of boots. 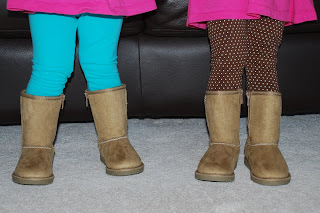 And then I decided a couple of days ago that the girls needed some black mary janes to wear with their holiday dress (pictures to come).

It’s only taken two years, but I am finally warming up to this shoe thing.

Cute shoes! Those moccasins are adorable and must be so comfy!

TIny is definitely a shoe girl. Today she was beyond excited from the moment she woke up because she knew she was going to get to wear her "fancy shoes" (black mary janes with a bow on the toes) to go to see a show and then out to lunch with Grammy and Grandpa. Whenever we get hand me downs, she digs through the bag, throwing all the clothing aside, searching for the shoes. I feel bad for Buba. He gets so sad when I tell him the fancy, sparkly, pretty shoes are all for Tiny. I suppose I need to do a better job of finding some fun shoes for him. Perhaps for Christmas...

our kids didn't wear shoes until they were just about 12 months...and then it was just the soft soled shoes. just recently we decided that it was too cold to NOT wear shoes, especially since they play outside.

what i don't get? sizing! i swear they wear different sizes all of the time!

super cute shoes though. and i love those striped pants!

I need to steal some of your shoe love! The girls are just starting to really walk and after finally breaking down under the pressure of my mother, I am still lacking some shoe mojo. That's 4 socks, 4 shoes, 4 strings to tie on two babies who would rather play with said shoes as cars along the floor or stack them inside the coffee table. So kudos to you for your perseverance!

Those moccasins look divine. I am always envious that the cutest shoes only ever come in teeny tiny sizes, I would love some of those for me! LOL

It took a while for me to buy Molly and Luke shoes too. They got their first pair as a Christmas gift so at 10 months. They were the soft sole type. I don't think they wore them until their 1st birthday. I probably like you really started buying them once they began walking. Now I am hooked. Kids shoes are so darn cute. I have to stop myself from buying a pair for every outfit. I know....sick huh? Enjoy new addiction! ;-) if only they were a little cheaper!

So cute, and such a funny little addiction you have now! My dudes have been wearing shoes since they started walking but I've just discovered the world of toddler slippers and fear I may go down the same path you are going down!!! I heart tiny, fluffy, fleece covered feet! I must get my hands on those adorable moccasins!

HA! This fellow-Deep-South mama never put shoes on my girls until they started walking either! Now, they LOVE them. We have to change into random shoes five or six times a day. Addison can often be found sporting two different kinds of shoes. She inherited her mom's love of shoes, I guess. : )

By the way, where did you find the boots? We have been looking for some, but I can't find cute ones that I am willing to pay for.