GG was here last week, and she’s always clamoring, “Let me buy the girls something!”  I appreciate the sentiment…and I LOVE to shop!...but I’m working really hard not to set the example for the girls that shopping is sport.

The girls *needed* some new towels.  We’ve been using the big fuzzy hooded ones since they were about a year old, and their inaugural set was wearing very thin.  GG and I went out one night after the girls were in bed, and I told her the girls would be tickled if she bought them new towels.

I’ve bought hooded towels several different places, but the ones from Kohl’s are the best by far.  I was disappointed there that they only had licensed characters to choose from (which is against my being to the core).  I found the lamb (from Doc McStuffins, I think), and decided it was the best of my options.  [I cut out the tag, and the girls didn’t know any difference.]

The next morning, the girls saw their towels on the counter, and they were thrilled.  “Whose are those???” they exclaimed with a glimmer in their eyes.

I got the towels washed a day or so later, and the last night GG was at the house, I whispered to the girls, “Let’s go take a quick shower before bed.  You can use your new lamb towels…why don’t you come out and surprise GG?”

They were GAME!  They RAN to get in the shower.  I told them to call me when they got out, as I wanted to coordinate them coming out together, all lambed-up.  I went to sit with GG while they showered.  I cackled when I heard them singing, loudly, in unison, “Baa, Baa Black Sheep”!  HA!  A bit of foreshadowing, for sure!

It was a little tricky to get the girls to wait on each other, coming out of the shower.  Once Baby A donned her lamb towel, she wanted to bolt into the den.  I finally coerced the girls into staying together…and they were SO excited to show GG their get-ups.

GG couldn’t contain her laughter, and neither could I.  The girls were more than happy to pile up for a picture...and GG was, of course, thrilled to oblige. 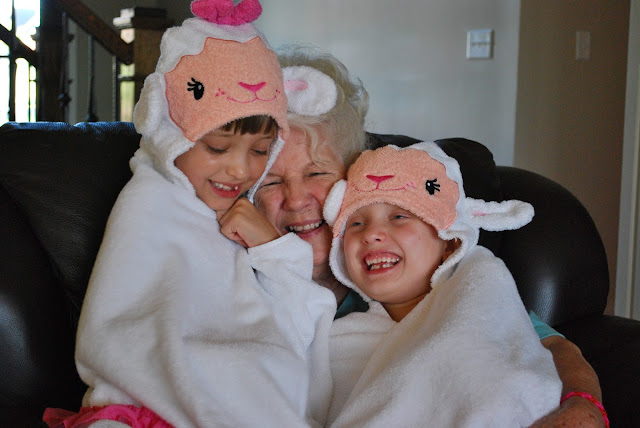 The laughter of little lambs...hardly anything sweeter!!!
at 5:54 AM
Labels: bath, dress-up, family

How cute are those? Grannies are the best

Grandmas are the absolute best. I miss mine every day and it's creepy to say this (with my kids being only 4 and all) but I look forward to becoming a grandmother :)